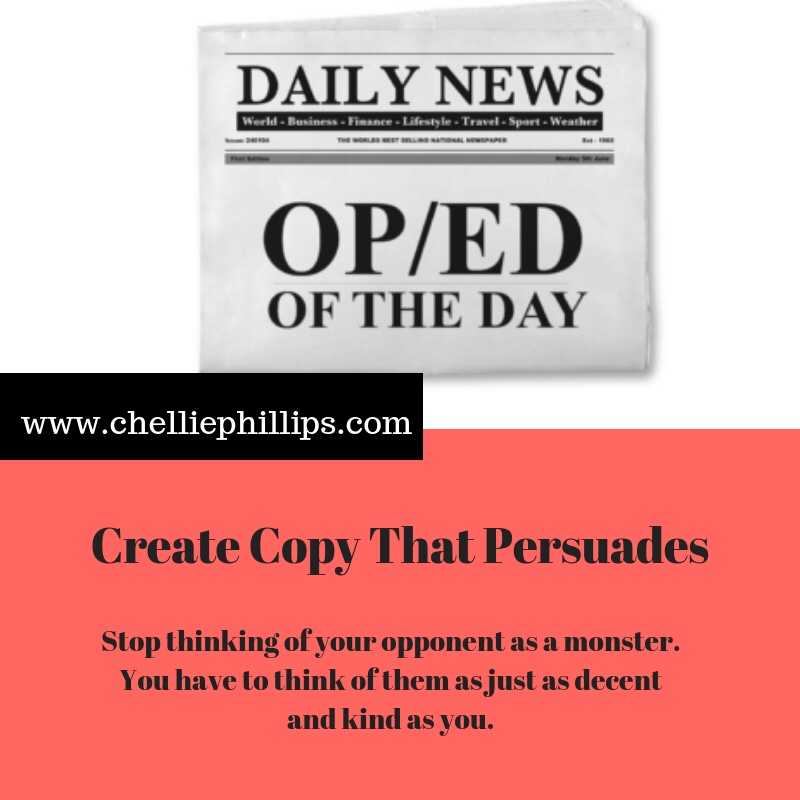 I recently learned from a master. Mike Long (mikelongonline.com or @mikewrites), an award winning speechwriter, screenwriter and instructor at Georgetown University shared tips on creating speeches, op-Ed’s, and essays that actually persuade.
Long said it’s important to learn emotion trumps reason.
“We are not rational creatures,” Long said. “A mother will save her drowning baby even if she can’t swim. We feel then we think. We write by building a case out of fact. We have to select fact driven articles that inspire emotions.”
The key to creating a compelling opinion piece is humanizing your opponent.
“Do you want to win or feel superior? Stop thinking of your opponent as a monster. You have to think of them as just as decent and kind as you. You don’t have to believe it in your heart – you can still believe they are a bastard – but you have to write like they are you. You have to ask, ‘what would it take to persuade you?’ What would a reasonable person do to defeat it?”
One op-ed won’t change someones mind. You can’t make purely emotional arguments. So how do you do it?
Persuasive opinion journalism takes a set of facts and pulls you to agree without calling on ideological code words. In other words, here’s what we can achieve with this measure. It’s a mistake to get wrapped up in left vs right. You goal is to find those in the middle that are open to something.
Bad ones show you how wrong you are and how right they are. Instead you want to advance peoples lives and show them why something matters.
Before you write, you need to think about what’s the point you want the reader to think about after they are done reading.
Long suggests having “The Meeting.”
You probably have to work with a group to get all the information and ideas for the piece, you need to control their expectations from the beginning. Long said the meeting should include the people who have the power to tell you what they want in the piece and the people who can veto it.
Before the meeting, make a list of 5–6 subordinate topics or categories of benefits (afford, economy, health). These will be subjective statements which you can prove by backing evidence into it.
At the meeting get their input. Ask them to tell you the categories they’d like to have in the piece or points they want to make. Narrow it down to 3.
Long urges the writer to speak as little as possible in this meeting.
“When you get to the end of the meeting say, ‘Since we’re all in agreement, I understand this is what you want me to do. Thank you.”
Then go back to office. Send out an email that says thanks for helping me figure it out. Here’s what we agreed on.
Get ready, because the next day, you’ll get email back from someone wanting you to change things. Send them an email back thanking them for letting you know. Tell them “I’ll be happy to change it. Will you run it past everyone or do I need to?”
As a writer, you don’t have a lot of ways to push back, but this fixes it. Once all parties have agreed to things in front of each other. Make the person initiating change get the ok from everyone else.
When you are writing for someone else, writers often feel they need to finding the persons voice.
Long said there’s no such thing.
“When you can make a reader feel the emotion and passion and understanding, anyone will think you’ve written it in their voice. It’s not about capturing the voice, it’s about being plain and simple. Be clear and direct and you’ll be heard.”
Once you’re ready to write, you need to know the structure. There’s the Opening, the Middle, and the End.
The Opening (peg, problem, promise). You’re looking for a connection to the news. That’s your peg. You need to identify what’s wrong. That’s the problem. Finally you need a clear statement about how you propose to fix it – the promise.
The promise must include the word must or should. (The governor should, Congress must) You’re looking for something that allows you to offer a solution that they might not be aware of. It’s better if it’s something you don’t normally publicize.
The peg sentence will start with something like, ” This month in the journal of or this week the foundation released.” It’s the timely piece that makes your opinion relevant and newsworthy.
The first paragraph is three sentences. The more you put in it, the less likely people are to read it. Don’t get hung up on anything other than getting their attention.
The Middle is where you put what you think and back it up by what’s true. Site something in the news that translates to your point of view. It’s assertion followed by objective evidence. What you think, followed by what you know.
You’ve got to do research to find the right evidence. Is the evidence useful to prove the subjective claim? 1. Does it help? Related to the point. 2. Is it objective?
The End (restatement and call to action). It’s where you recap the big idea. Restate the promise and solution. Make sure you have call to action. That means give them something to do with their arms and legs like vote, donate, contact, or offer belief
You’ve hooked them now. Following these guidelines will have you well on your way to persuading readers and moving them to action.