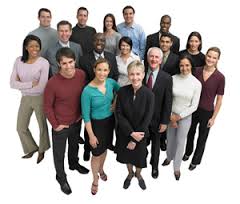 Chain of command. A hierarchy. Organization charts. Are all of these terms a thing of the past in the workplace? According to Seth Mattison with Future Sight Labs, the new generation of workers see the office in a very different way.
If you’ve been in the workplace for over 15 years, you probably follow a set of unwritten rules. Keep your head down. The higher ups set the direction. You are rewarded for following. If you work hard and keep your mouth shut, you’ll be rewarded. You view the workplace as a world of scarcity – there’s limited spots to move up, so you keep everything to yourself and don’t tell anyone else what you know. That gives you security and power.
You also feel the worlds don’t mix. Separate parking for the higher ups. You don’t co-mingle at break. You never go above anyone head.
Mattison says the next generation of workers see this very differently. It’s more of a network. It’s all interconnected – a web of people and talent. This group came of age where everything is connected. It’s constantly changing.
So how did this change occur? It started at home. There is no head of the household anymore. The parent child relationship has become one of friend versus authority figure. The child often feels like they know more about topics than the parent. Think of all the children who are now the “chief technical officer” in their home. The authority figure has been replaced by a peer. They aren’t taught to respect their elders, nor do they look for them for guidance and learning. YouTube has replaced the dad who shows the son how to change a tire or oil. They have learned they can teach themselves.
This whole philosophy is carrying over into the workplace. It is reshaping the view of the authority figure or boss.
The free flow of information is a requirement now. This generation values access and visibility. Truth and transparency have become the traits they desire in the corporate structure. There’s also the sense that authenticity is paramount. What is said has to match what they feel. You have to show them the “why” we do what we do.
Don’t be surprised is this group questions every sacred cow your organization holds dear. There is no untouchable process, person or idea. The boss can no longer sit behind the desk in isolation.
There’s a battle waging, Mattison said. There is a great divide in how both set of workers function in today’s workplace. It’s going to take some open discussion to find a way for both mindsets to function effectively moving forward. The old unwritten rules are going to have to change. Open communication from all levels is a must. It’s no longer going to be “pay your dues and earn your seat at the table.”  The new generation of workers have already picked their seat and are waiting on you to bring a fresh set of ideas to the game.