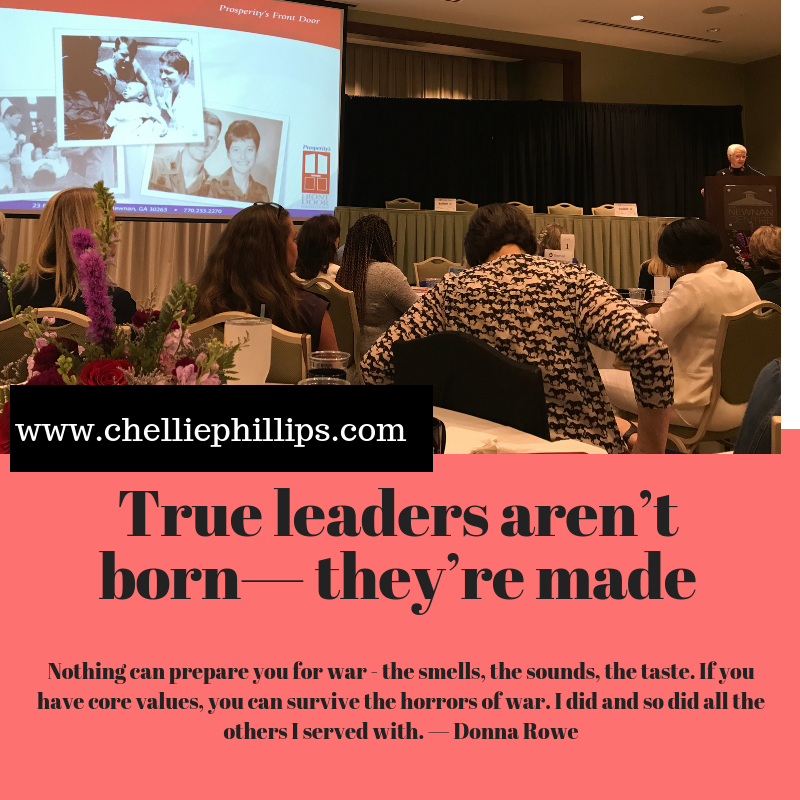 True leaders aren’t born. They are made by their circumstance. They are the ones who will step forward when others won’t. They are the ones who run toward problems and disasters. They are the ones who don’t shy away from difficult times.
“Your circumstances make you a leader,” Donna Rowe, former Captain in the US Army Nurse Corp (1964-1969) and Vietnam Veteran, told a group of women gathered for the Wisdom of Women event hosted by the Newnan-Coweta Chamber of Commerce. “All leaders exhibit the same traits: trust, faith in people, the ability to delegate, and the fortitude to make a decision.”
Not everyone thinks about the ability to make decisions as a leadership trait. As you begin thinking about it, you’ll see it’s a huge part of leadership. With leadership comes action. Action can’t happen without a decision to act. And if you wait on absolute certainty, that moment might never come.
Rowe’s mother instilled this idea early on.
“My mother gave me a poem,” Rowe said. “It says when faced with a decision, make it as wisely as possible and then forget it. The moment of absolute certainty never arrives. Be ready to accept the criticism if you think the decision correct. Never be afraid to stand up for it.”
Women have proven to be great leaders. According to Rowe, Condoleezza Rice and Margaret Thatcher are just two examples of great women leaders.
“Rice says not to be a reluctant leader and don’t lead from behind,” Rowe said. “Thatcher showed courage when no other free country leader would step forward, she would. She was called the Iron Maiden. She brought dignity to decisions.”
One leadership trait Rowe shared stood out to me. She said General Patton said you never tell people how to do things. You tell them what the mission is and they will surprise you with their integrity and heart when they buy into the mission. They’ll win because the mission becomes theirs.
Rowe herself epitomizes a fearless, female leader. She was a 24-year-old woman at war.
“There were 11,000 women with boots on the ground during Vietnam— 97% were nurses,” Rowe said. “There are 8 women on the Vietnam Wall. All nurses. There’s still one missing in action —a female doctor. 79% of the men were volunteers but 100% of the women who went were because they didn’t draft women.”
Her mission now is to set the record straight. She said when people think of Vietnam, they think of those who served as drug addicts and baby killers.
“We were not the worst of the worst, but the best of the best. We came with a mission and a purpose—to free the people so communism wouldn’t destroy their lives and future.”
“I was raised with a love of God and dedication to country,” she said. “Our social life centered around church and school. My parents put mini flag in our hands and took us to the cemetery to decorate graves of fallen heroes. I was raised on patriotism, love of God and family.”
“The military taught me duty, honor and country,” she said. “We went off to war. Nothing can prepare you for war – the smells, the sounds, the taste. If you have core values, you can survive the horrors of war. I did and so did all the others I served with.”
Rowe’s time for decision came in May 1969. She described a scene full of screaming, crying, bleeding men. It was during the middle of the May Offensives. Helicopters coming one after another.
“You’ve got to understand the average age of the soldier was 18. They came upon a place where a whole village had been wiped out. They found a lone baby still alive in the arms of her dead mother. The sole survivor. We were the only military hospital nearby. There was an order of priority about who we took. U.S. Military were first, then civilians. The call came across the radio they had a severely wounded infant on board. My sergeant asked ‘what do I tell him captain?’
“I said tell him third field hospital will receive. He said, you know you’re gonna take hell for this one. I remember telling him I was already in hell, it wouldn’t make a difference.”
The soldiers had loaded up the baby still in the arms of the mother. They had made the decision to do what they could to save the baby. The medic on board managed to keep it alive until they arrived at the hospital
“I grabbed everyone,” Rowe said. “We had a pediatrician who had been drafted. I grabbed a priest. We were going to baptize the baby. Because of my faith, if she died, she’d go to heaven and if she lived, there was a catholic orphanage nearby. Either way she needed to be baptized. There was a Morman, Catholic, Methodist and Buddhist who were working to keep her alive. I say she had a ecumenical baptism. She had frag wounds in her chest and abdomen. And she lived.”
The story comes full circle when 34 years later, the girl found that baptism certificate and started trying to find the people listed on it.
In the Shadow of the Blades is a movie which highlights this amazing story as well as others from those who served in Vietnam.
“She is the story of the Vietnam Vet,” Rowe said. “I tell the story for all the uncles and grandfathers who have fought to prove who they really were.”
Rowes determination to dispel the negative image of those who served in Vietnam gives new meaning to strong, fearless, female leader.
View clip of the movie here