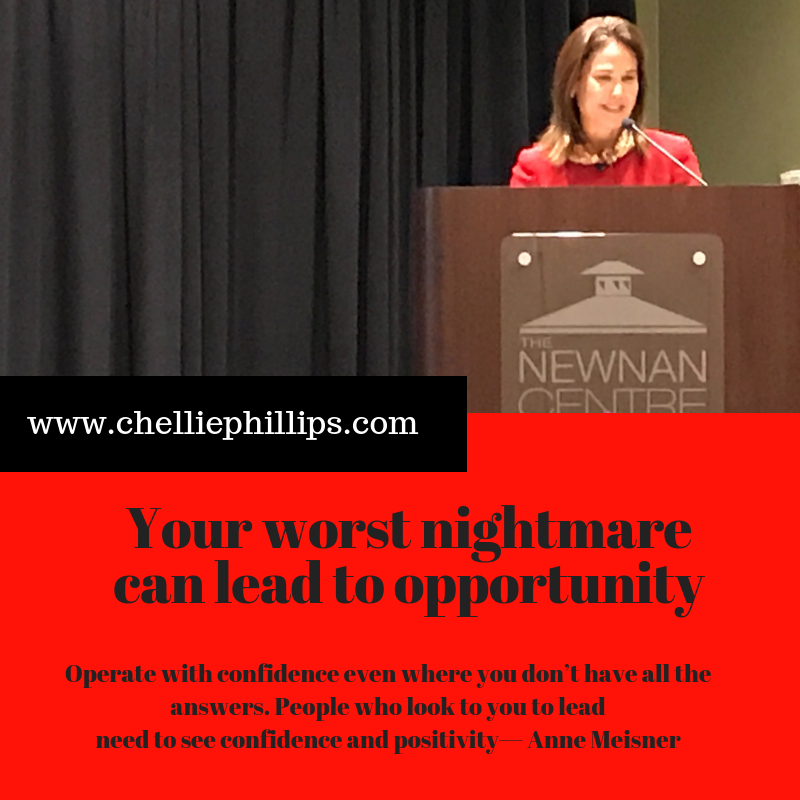 Worst nightmare can lead to opportunity

Anne Meisner, President and CEO of Cancer Treatment Center of America-Atlanta, reminds us that even when things seem devastating, good things can come.
Before you can appreciate her story, you need to know her background.
“I’m a nurse, still am, not used to be,” she said. “I’m very proud of my background. It’s made me a stronger leader. I graduated in 1981. I remember wearing my hat and getting my pin. It was my identity. No way in heck would I have imagined myself sitting in the CEO seat.”
Her journey to that seat has been one with many twists.
“I remember the day the guy who I thought was my worst nightmare walked in,” she said. “He was the turnaround CEO. CTCA was struggling. It was in the middle of reinventing itself. Our owner had a great vision but not necessarily the best tools to make that vision happen.”

How things that seem devastating can be a good thing

“My direct boss was my mentor and an amazing woman,” Meisner said to the group of women gathered at the Newnan-Coweta Chamber of Commerce Wisdom of Women event. “The company decided to let the CEO go and bring in someone new. Everyone loved the current CEO. We knew the company had problems, and everyone was working hard to make it work. Everyone was on edge and worried. When we heard they were bringing in someone new, we started wondering what it meant to us and the organization.”

Fear of the unknown

“Roger, the new CEO, showed up,” she said. “He was an intruder. We thought he was gonna break everything we had tried to fix. He let go of half of the management team—my boss included. I thought my worst fears were coming true.”
Meisner started pulling my resume together. She wasn’t sure if she wanted to be there.
“It was chaotic and tough times,” she said. “You show up one day and something was different. I was sitting in my middle management office trying to reassure others its going to be ok even though I wasn’t sure it was. The next thing I know the CEO comes in my office and says I’ve been talking to people about what you are doing and I like what I’m hearing . He wanted me to be a part of his management team. I looked at him like he had to be kidding. It was the last thing I expected — to be invited to be a part of his executive team. I told him I wanted to think about it.”
Meisner spent a lot of time talking to people. She thought about why she joined the organization to begin with.
“There were so many conflicting ideas about what was going on,” she said. “I felt the work important and needed to continue, but I also felt like a traitor since it devastated so many I loved and cared about. I think women in particular struggle with these decision paths.”
Meisner did what a lot of us do in these situations. She called a friend.
“I turned to Sister Collette,” she said. “She said ‘you need to listen to your inner voice about why you joined it to begin with’. She told me I needed to respect the fact the new CEO saw something in me. Then she told me to quit whining because people were counting on me to make sure things happen. After that pep talk, I signed on.”

Meisner said it was like starting over. It was a new group with new dynamics. She grew to respect and admire her new CEO.
“I learned there are many different ways to manage and lead,” she said. “Don’t be afraid of conflict. I think women struggle with this because we look for approval and community. We feel conflict messes stuff up, but out of conflict you can move forward.”
She shared an aha moment which came after a particularly long and grueling board meeting.
“In the early days we were trying to fix the program,” she said. “We had board meetings and everyone dreaded them. Everything was under a lot of scrutiny while trying to get things back on track. They were tough meeting where we talked about talent issues and financial issues. Roger was getting questioned by every member of the board. There were raised voices. I was new and felt it. This meeting was a 12 hour board meeting. I felt like I’d been through the mill. He looked like he just won the state championship. I asked me how he thought it went. He said wasn’t that great. I was like how do you think that? He saw challenge as opportunity and way to move forward past obstacles. For every challenge, he had rebuttal and response. He answered each challenge with confidence.”
Meisner said she learned you have to operate with confidence even where you don’t have all the answers. People who look to you to lead need to see confidence and positivity. You need the ability to convince someone you are on the right path.
She also said women are horrible at self-promotion.
“Roger taught me you can’t sit by and wait for people to notice you. A great job isn’t the reward and people aren’t necessarily going to recognize that without you making it known. Men go about it differently than women. They lay claim to it and have no problem doing that. It’s about confidence and the willingness to self promote. It’s not bragging or over inflating what your did—you are a contributor, you need to own it.”
Meisner rose through the ranks under her CEO. She earned several promotions and one day her CEO told her the company had more growth plans and he would be leaving the CEO seat and wanted her to step into the role.
“My initial reaction was I’m not ready and couldn’t do it,” she said. “I was having that conversation with him about if I was capable. He asked me ‘who do you think has been running it while I’ve been out doing the corporate stuff?’ He wanted to know what my problem was. I was diminishing myself. Self doubt is real. Women especially fall for the imposter syndrome. We believe we have somehow duped others into believing we are a success.”

Own your power – advice for women in leadership

“You’ve got to own your power,” she said. “You deserve this. You have to change your mental model and be real about your accomplishments. It’s not ‘I did it because of something going on, or the right timing.’ It’s about your skill.”
Women need to quit comparing themselves to male colleague. Meisner urged women to follow your own path.
“There’s no right way or one way, there is only your way.”
Meisner shared a revelation which came after serving on a panel with three male colleagues. Each said they wanted to be a CEO from birth.
“That was their whole plan,” she said. “It wasn’t me. My path was much more one of picking opportunity, raising my hand here, winding way through the organization because I was passionate about what I did and who I worked with.
There is no one path. When you think about what women do to themselves to sabotage their path…it’s unnecessary. My job now, and those of you in management, is to figure out how to lift up and promote others and pay it forward.”
Meisner said her proudest accomplishments are stories about the people she has worked with who have moved on to amazing roles both in and out of the company. She has a sense of pride in helping put them on the right path.

Challenge for the future

Meisner challenged the women gathered to think about how we can create a shift.
“There are less than 5% of women leading Fortune 500 companies. There’s disparity in boards and pay. It is generational work we have to do. It’s about having important conversations as a county and community. Women in the workplace need to shift the idea of “Me Too” which spotlights women as victims and instead it needs to be “Me Too” on deserving opportunity and showing we have the ability. It needs to be “Me Too in equal compensation.”
Meisner said, “I’m a great example because someone believed in me and I was able to conquer my own fear and doubts. There’s no reason that opportunity shouldn’t be available to everyone else.”