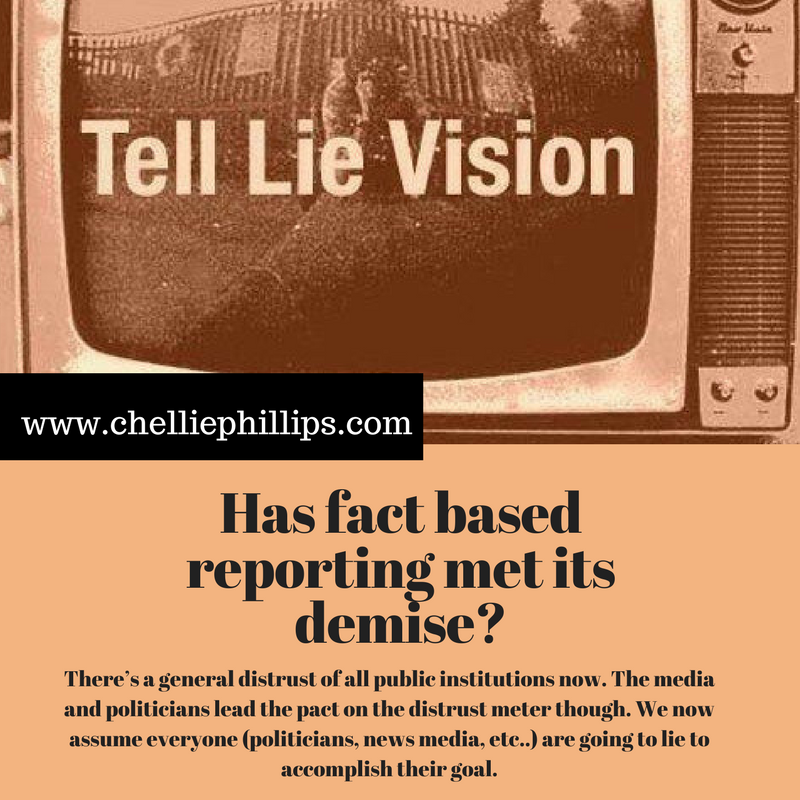 Has fact based reporting met its demise?

The last few months, I’ve had the privilege to learn about civic health and social connectedness as part of our leadership group. Civic health encompasses social connectedness, community involvement, political action and the level of confidence people feel in institutions such as schools, media and corporations. I’ll have more to say about social connectedness in a later post.
I wasn’t surprised to learn that media falls out low on the trust scale. That’s extremely disheartening to someone who wanted to be like Walter Cronkite when they were young. However, even I find it hard to take anything I hear from a “new source” as fact. I generally look into topics on my own and make my own opinion.
There’s a general distrust of all public institutions now. The media and politicians lead the pact on the distrust meter though. We now assume everyone (politicians, news media, etc..) are going to lie to accomplish their goal. We see all lies as the same. We don’t just think of them as exaggerations of information. Most people feel like they only receive select information – not the whole story. That select information is provided to move you to a certain viewpoint, not move you toward the truth.
When I was getting my journalism degree, we were taught to look at seven key values to determine if something was newsworthy.

Today, what’s news is much less defined.
It’s a dangerous road we are headed down. While news has always been a business, at one time there was a clear line between news, editorial and advertising. That line is becoming harder and harder to determine. Editorial content shows up outside the editorial pages of newspapers now. Anchors provide opinion pieces as part of general newscasts. Space can be bought and content set to look like regular news stories.
Ethics in media can be hard to determine. Add in the Wild West of social media and it’s no wonder people have a hard time deciding what is true and relevant.
It’s becoming more about getting a video and speculation about an event out before the competition and less about providing accurate information on what has happened.  Social media has driven that. We are all content curators now. Everyone has a camera in their hand today. Every phone is equipped with everything a person needs to record an event and broadcast it for others to see.
What we’re getting now is speculation without confirmation. We are bombarded with “news” 24 hours a day. There is no news cycle anymore. Sometimes it’s 2 or 3 days after an event occurs before the truth starts showing up. By then, you’re lucky if the story is still even a headline. People who don’t take the time to dig into the information are left without the true facts. There’s hardly any correction or retraction made at this point. Everything is a crisis; at least until the next story takes over.
How information is framed is vital. Be careful where and who you choose to trust for your news. Be diligent and take the time to research what you heard. Remember, the first information is likely flawed and filled with speculation. It’s up to you to be a fact checker.